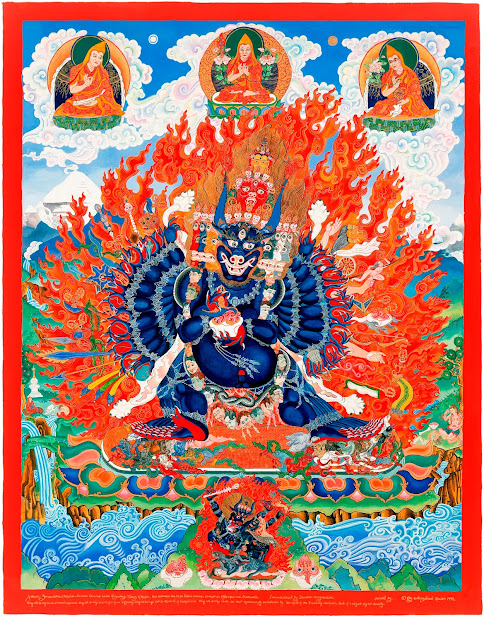 This giclee fine art print of the Tibetan Meditation Buddha Yamantaka / Vajrabhairava is available for purchase here.
The print is a high resolution copy of an original thangka commissioned by a practitioner in 1998. She had searched for an accurate portrayal of Yamantaka or Dorje Jigje on trips to Nepal, Tibet and Dharamsala India and had come up empty handed. There are many 'thangka sweat shops' in these places which have a mass production assembly-line using very young artists, who aren't too concerned with accuracy of proportion or color and this is all that she saw. She asked me if I would do one for her, being a watercolor painter who worked in a similar style and a practitioner. We consulted my Tibetan Lama Denma Locho Rinpoche and I was given permission to do it and subsequent thangkas, as long as I used the proportional grids.This Tibetan Yidam is used (under the guidance of a Lama) to meditate on transforming anger into wisdom and transforming the fear of death. A mirror of sorts for our deluded perception of reality that causes the anger to arise. It is traditionally said though, that just 'looking' at this image can pacify anger and this is one of the reasons I offer it to the 'lay' community as well, in the form of a print. The Tibetan Lamas at the top are Tara Tulku, Je Tsongkapa and His Holiness the 14th Dalai Lama. (when the Dalai Lama saw this, he had a chuckle, because I put glasses on him and normally the Tibetan painters wouldn't have done this, because poor eyesight is a sign of mundane imperfection). At the bottom of the print stands: Kalarupa (or Yama the Lord of Death) and his sister Chamundi on top of a bull, protectors of the practitioner who meditates on this tantra.The giclee print is done on Archival Paper with Archival Inks. Signed, limited edition.
at December 17, 2020 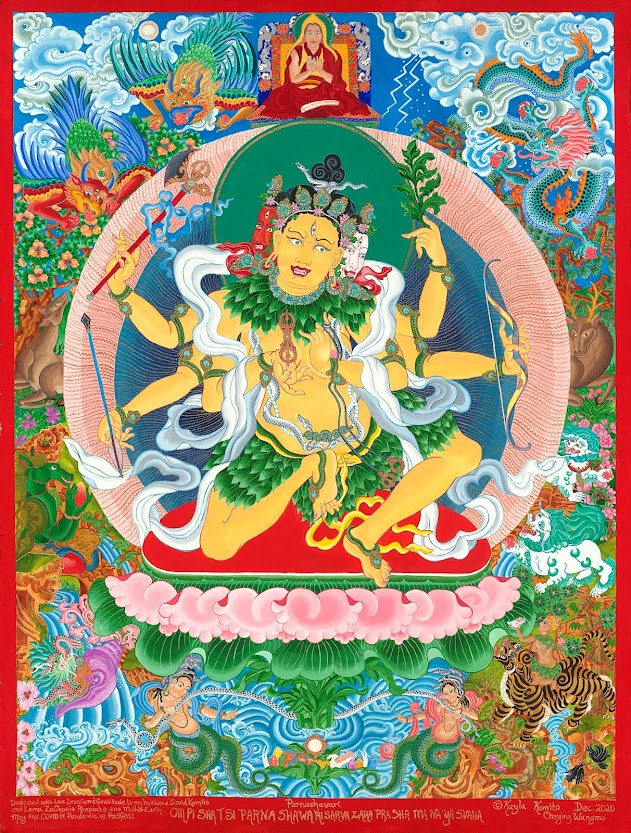